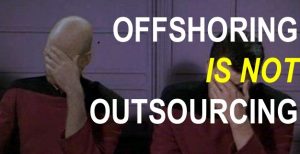 Local outsourcing has however been a business tool for over a century and continues to be attractive to forward thinking businesses.

Early forms of outsourcing were staff recruitment and insurance broking.  Employment agencies, brokers, advertising agencies and market research firms are now so well established they are no longer even regarded as outsource providers, yet, simply, they are just that.

Administration outsourcing is growing too.  Activities such as payroll which is used by 54% of US firms and by an estimated 25% of Australian businesses is now outsourced.

Outsource Credit Control began in the USA and then spread to UK in the early nineties. It was originally factoring companies that had the lion’s share of the market.   Now smaller firms benefit from professional outsource credit control and debtor management, so if looking after debtors is too hard for your Company – maybe not having the staff or the time – then you should seriously look at outsourcing it.

At a recent Outsourcing World Summit, the top three reasons for outsourcing work were:

Why You Should Outsource

Outsourcing is ideal for tightly run, short staffed businesses and can be cheaper than managing debtors in-house. Good outsourcers act like staff, yet without being on the payroll. Apart from paying you sooner, your debtors would not even know an outsource specialist is involved because everything can be done in your name.  At Accounts Receivable Solutions we announce ourselves as the Credit Controller for [Your Company] and have an electronic signature for Your Company which is used on emails.

And importantly at Accounts Receivable Solutions we don’t have debtor payments coming to us.  It all goes directly to you.

If you are a small businesses or professional firm, debtor management outsourcing can put you at the top of payment queues, which means getting paid before others, rather than getting paid late – often after all the rest. But getting paid promptly is today essential and is likely to remain so for a long time, so businesses are looking closely at outsourcing their credit control.

There are of course alternatives for businesses that are short-staffed, such as asking spouses or friends to do credit control. But this is not a good idea as they will be far less experienced and effective as a full-time Receivables specialist.  Plus the fact that many find the task of asking for money stressful.  So should inexperienced staff who probably dislike doing it be forced to do so?

Being so ‘raw’ at the job means they will take longer to perform the task on a regular basis and their time is probably costlier to you than the actual charge-out rate to an outsource company.  By using their time to grow your business instead of asking for customers for money they are ridding themselves of a non-earning task.

Whatever course of action you decide upon you should never go easy on asking customers to pay. Looking after debtors is of vital importance because doing so can go as long way to saving a business from going broke.